And We Stay by Jenny Hubbard didn’t work for me. I took it out of the library four or five times before I was able to power through. All the things I loved about the other novels I’ve read recently: complex characters, pacing and plot, use of time or flashbacks, and magical realism didn’t come together in And We Stay. 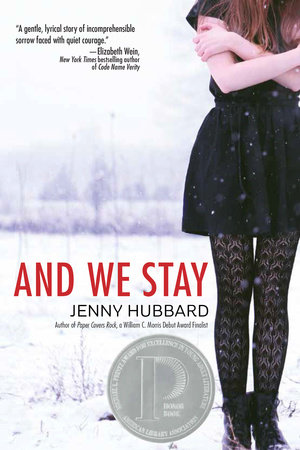 The most interesting and relatable part of the story, Emily Beam and Paul’s relationship, was told through flashbacks. The book started out with Emily attending boarding school in Amherst, Mass. Through flashbacks the readers learned that her boyfriend Paul Wagoner brought a stolen gun into the library of their high school where he threatened Emily and then killed himself. As the story progressed, readers learned that Emily was pregnant and planning to have an abortion, which she ultimately does. Paul’s disintegrating relationship with Emily was one of the reasons he ended up with a gun in the library.

At the boarding school, Emily wrote poems to soothe her soul and deal with the trauma she went through. Inspired by Emily Dickinson, Emily Beam’s poems were interspersed throughout the book. One of the main reasons the book fell apart for me had to do with all the added poetry. Emily Beam wrote numerous poems during her time at boarding school printed on the pages of the book, but they did not resonate with me. They seemed superfluous and superficial. I skipped over many of them to get on with the story. If the author limited the number of poems, the verse would have been fine, but the poems happened often.

Oh, yes, she could feel it/even though the bullet/had never stabbed her skin./ The bright white heat/ burned at her core/ where two lives/ beat, and if he’d aimed/ there and pulled the trigger,/red would have crested/ like a broken dam/ over her hands/ as her last word rushed/ up to her throat– Paul– / a sound that took no time and also lifetimes” (Hubbard 39).

It could my personal writing or reading style, but both the inclusion of the poems and the poems as written failed to engage me as a reader.

Emily also developed a quirky connection to Emily Dickinson, and the author supplied hints that the dead poet has returned to help modern Emily cope. Due to Emily Beam’s fascination with the dead poet, readers learned a lot about Dickinson’s history. While as an English teacher, I love knowing about poets, as a reader I wasn’t interested because it broke the flow of the narrative.

Finally, the connection to Emily Dickinson was supposed to be further demonstrated through magical realism, but the magic, lights turning on and snow falling, didn’t make a significant impact Emily or her poetry.  This was an area that could have been significantly improved and the magic intensified so that readers would be able to connect how Dickinson was helping Beam get through the turmoil she dealt with.

In addition, the characterization of modern-day Emily was weak and lifeless. I understand that the author wanted to portray her as depressed, but she came across as one dimensional during much of the book. I actually preferred Paul’s character better in the flashbacks because he realistic and emotional.  Her friends at the boarding school were also rather poorly drawn. The readers never really knew any of them in depth so they became stereotypical. Her offbeat roommate. K.T., filled the role while other characters came in as the artist, the jock, the rebel, etc.

Finally, the pacing was glacier slow. Nothing happened at the boarding school for most of the book other than Emily drinking coffee, writing poems, going to class, and trying not to make friends. Over all, I would not recommend the book as it was very forgettable.

I wanted to end with a positive note. The writing itself was beautiful. Jenny Hubbard is obviously a talented author who crafted beautiful prose and descriptions. “During Trigonometry with soft-spoken, square haired Mrs. Frame, Emily imagines all the identities she could invent” (Hubbard 49).  I loved the way that I could visualize that clear, initial impression of each character. I only wish that initial impression could have deepened as the book progressed.