Have you ever felt powerless? Have you struggled to enact change? The fight for freedom and power in a society that treated women as little more than possessions is the reason I love Harlots on Hulu so much. I’m immersed in season 2 and just as engrossed as I was when I began binging. The series focuses on Margaret Wells (Samantha Morton) and her daughters, Charlotte and Lucy. Set in 18th century London, Well runs a brothel.

As a period piece, it is well done. As a character study, all the people in and around the Wells’s household are realistic and well drawn. They are not caricatures. They exude humanity and emotion, often fear and helplessness, but also the struggle for freedom, independence, and power. 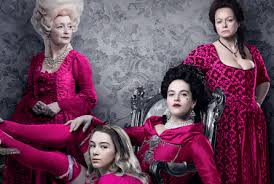 Most engrossing is how women claim power in their lives and fight for dignity and respect while dealing with appalling circumstances and a society that views them as expendable.  We watch Charlotte and Lucy barter for a better life using their sexuality in hopes of more freedom and to lift themselves out of poverty. All the while, they fight for something much more meaningful. We watch women face triumph and tragedy as they are forced to make decisions about their bodies and their lives based on the coins of rich men. Doesn’t seem that far fetched even today.

Watch it. You’ll love it.