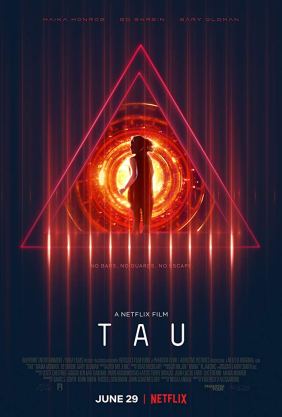 The movie starts with an action-packed punch but slows in the middle and the end. TAU (voiced by Gary Oldman) is the AI device that runs the home of a deranged but functioning-in-society scientist named Alex (Ed Skrein). He kidnaps Julia (played by Maika Monroe) and holds her captive inside his futuristic smart house in an attempt to complete his final project. Julia reasons with the AI hoping to develop a relationship and escape.

After Julia is kidnapped, she wakes up held captive with two other survivors. She’s smart enough to find a way out of the cell but not smart enough to save the other people. Then the real movie begins and begins to slow down.

We meet Alex, mad scientist, and TAU, the AI in charge of the smart house. TAU’s weakness is he wants knowledge, and Julia will exploit any weakness to free herself. There are slow moments when Julia and the AI interact, play music, learn. I don’t know, but something was missing in the delivery. I wanted the same edginess and suspense at the start of the movie to last throughout.

Ex Machina is a much stronger film with a similar theme about what happens when AI comes to recognize its own existence. As TAU learns more about itself and the outside world it has to decide whether to side with the Alex, its creator or Julia who promises much more in the way of knowledge.

TAU is worth the watch but find the time for Ex Machina as well.