After a disappointing round of Oscar-nominated movies, I fell in love with the Florida Project. 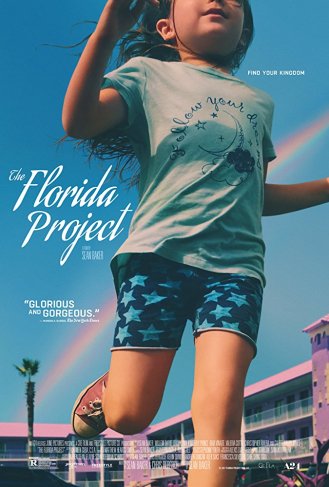 Lady Bird was a “meh” for me.  It felt very much like a been there, done that before type of movie. Dunkirk was visually appealing. but I ended up liking the side stories more than the central one. Something about the main characters, when the movie ended, left me feeling less than satisfied.

Many movies like The Big Sick, Get Out and Wonder Woman were enjoyable, solid films with “Oh wow!” moments, but didn’t live up to all the hype I’d heard before viewing. Even Logan and The Shape of Water, both which I truly enjoyed and ranked high on my list, couldn’t keep pace with the deceptive simplicity of The Florida Project.

Moonee (Brooklynn Prince) lives with her mom in a cheap hotel room near Disney. The film follows the six-year-old as she and her friends survive and thrive under the less than adequate care of those around her. Prince’s performance is brilliant. She is mischievous, sweet, and downright mean. Her character shows how, while still innocent and good, her environment has already left scars.

The movie is wonderful in its complex character portrayal. Viewers don’t dislike Moonee’s mom Halley (Bria Vinaite). She is most definitely flawed, but loves her daughter and tries. Really tries sometimes, while leaving Moonee to fend for herself most other days.

Willem Dafoe plays the manager who has his own problems, but works hard to protect the raggedy band of children around him. The end scene, which I can’t give away, leaves the viewer wondering the fate of all those involved.